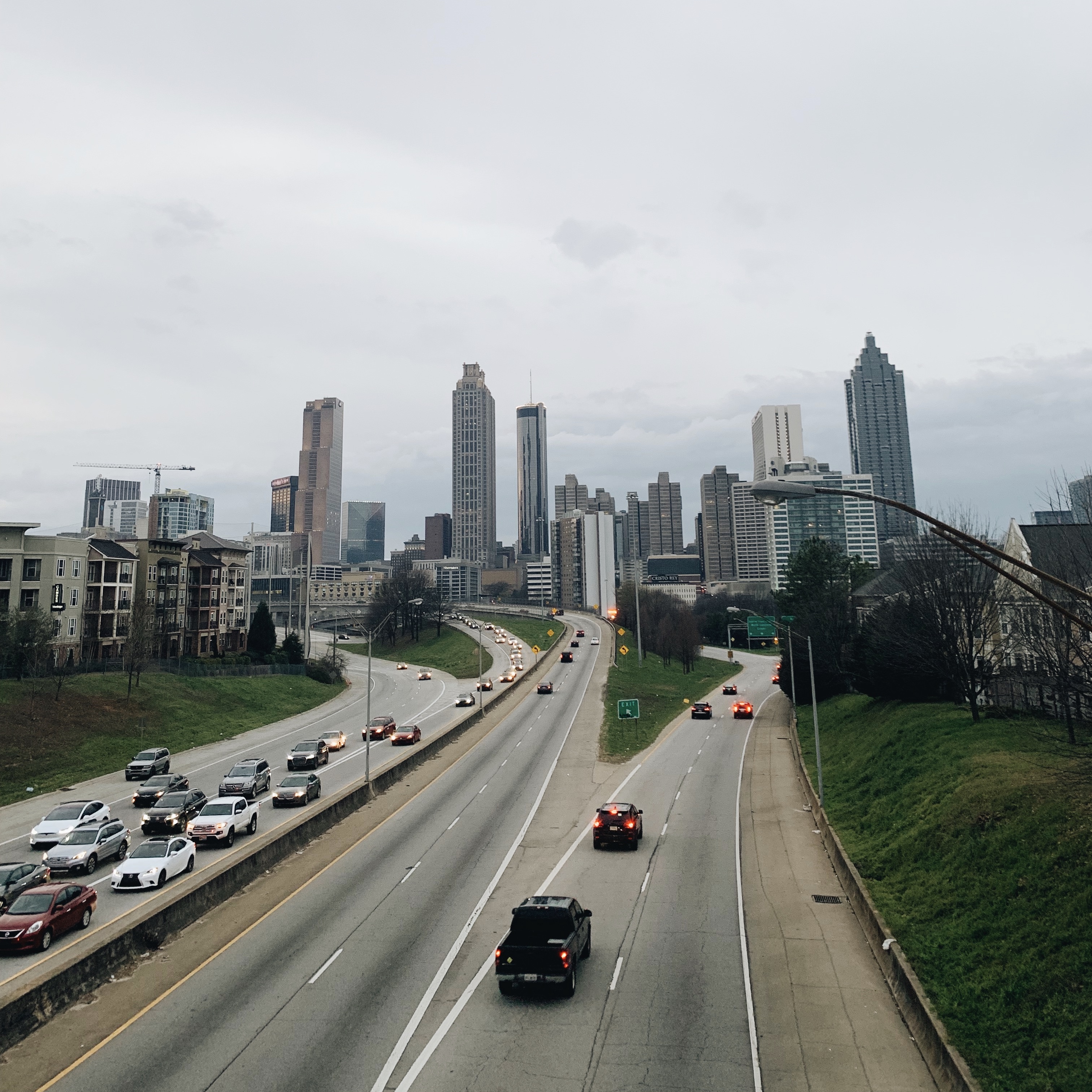 A great long weekend spent in Atlanta with my best friend of so many years. 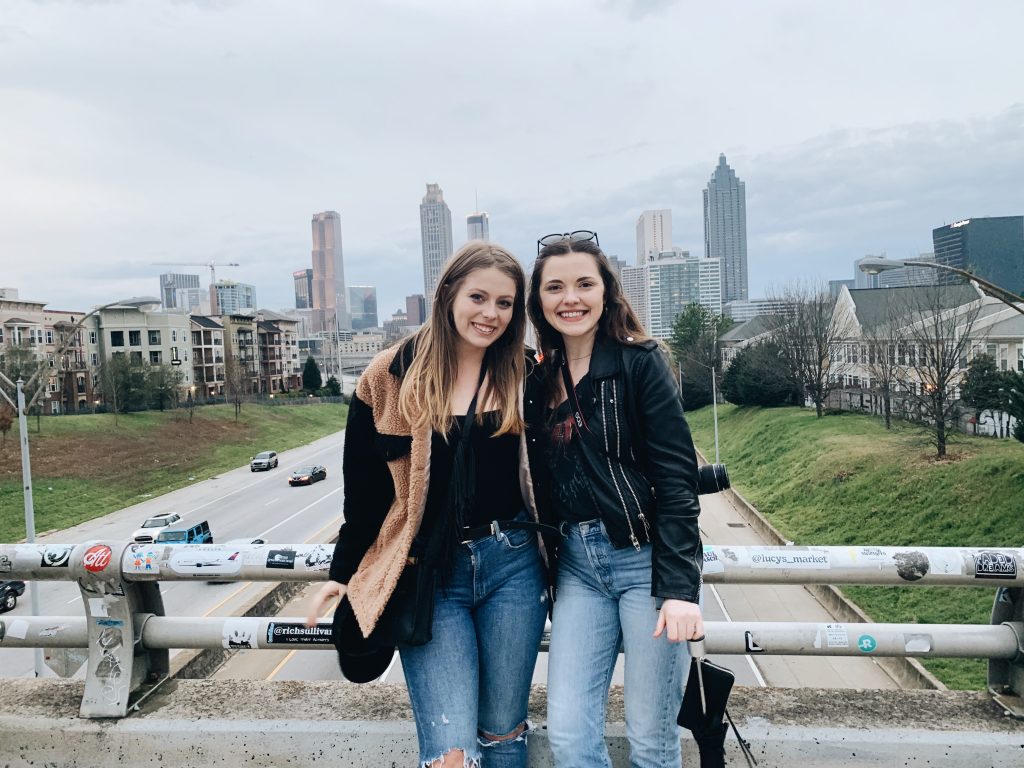 We grabbed an AirBnb in Midtown, just north of Downtown ATL. It was a great location if you are looking for bars and restaurants in walking distance and if you want to explore Piedmont Park, which has great views of the city and a ton of trails for running/walking. It is also a great spot to stay if you are flying into Hartsfield-Jackson, because there are multiple MARTA stops to get to and from the airport without having to put up with traffic.

Since we both spent the day at work/in class and traveling, we decided to grab ingredients for tacos and margs at the Trader Joe’s down the road and stayed in to catch up since we haven’t seen each other since July. We made crispy fish tacos with delicious rosemary + grapefruit + lime margaritas. 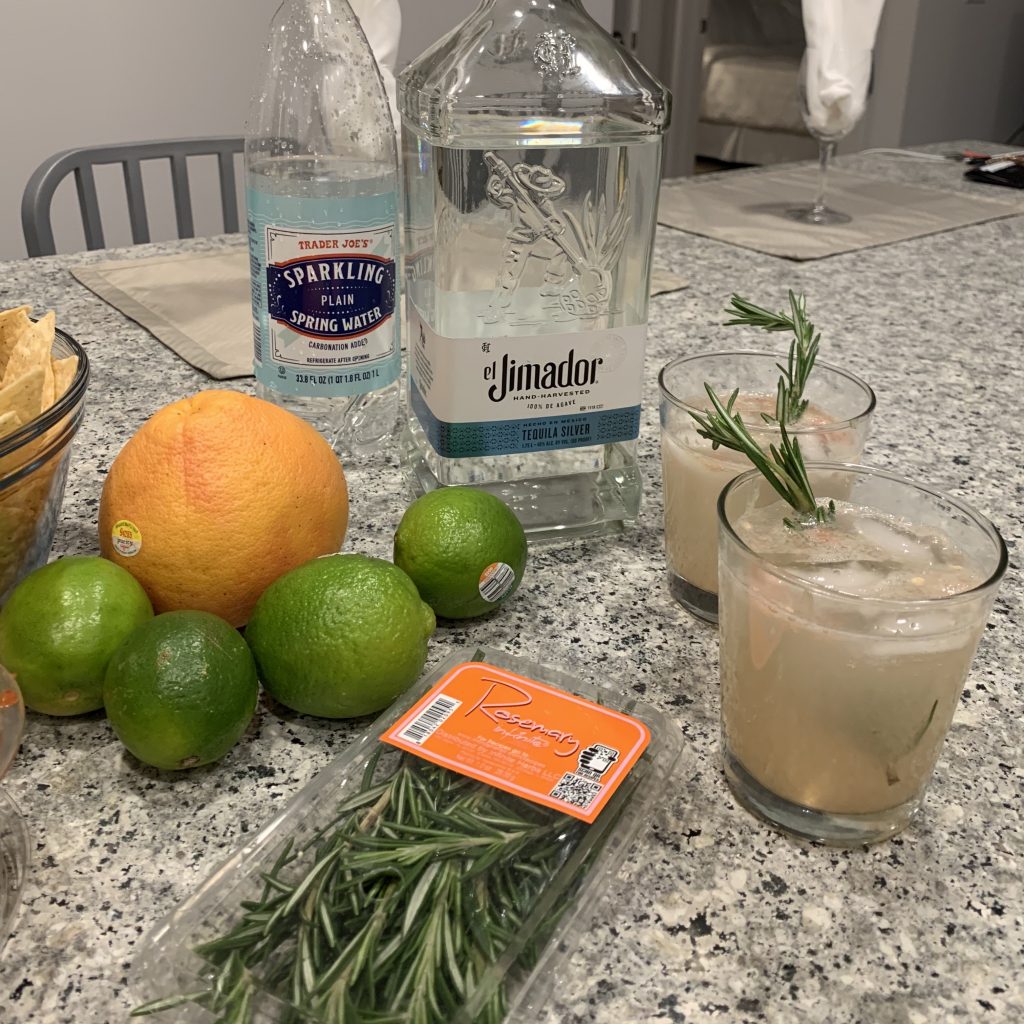 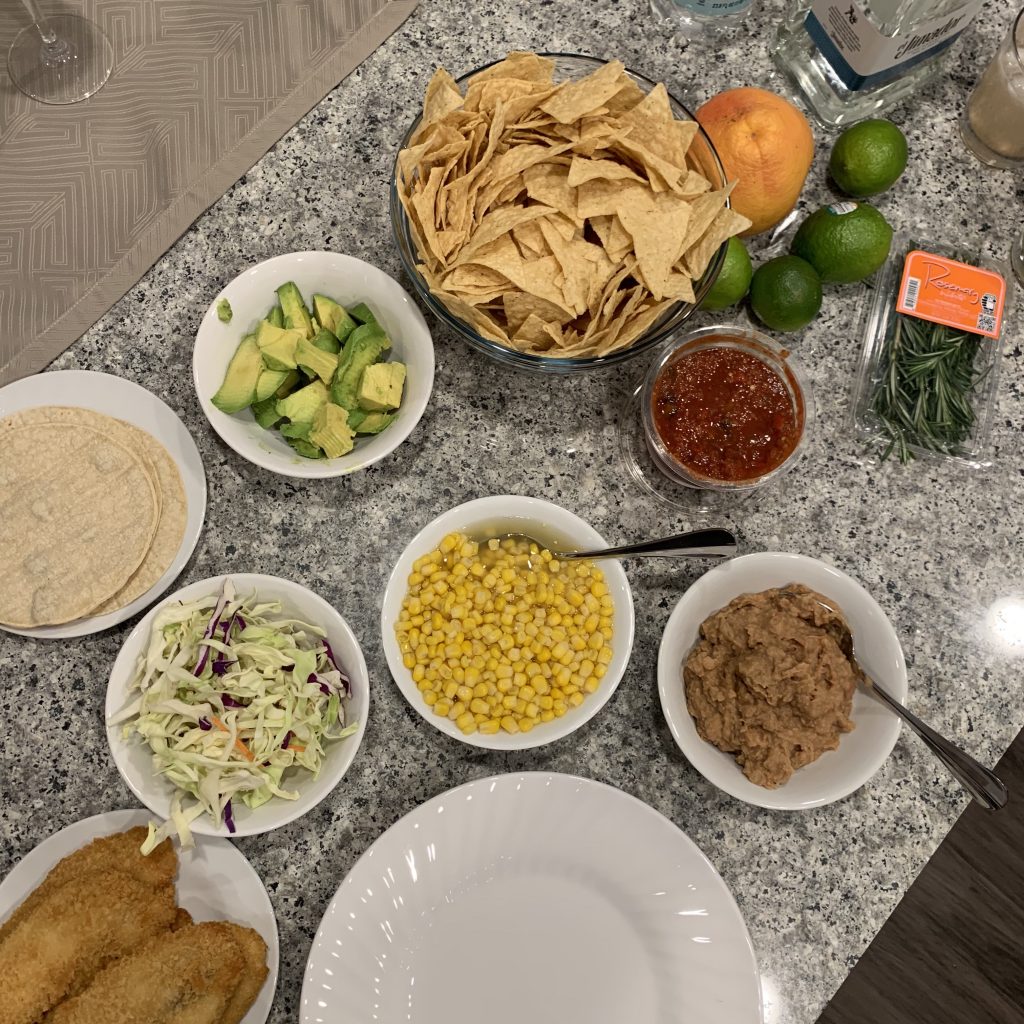 Day two in the city, our first full day, started at Octane Coffee at the Art Center. A super cute, modern shop with tasty oat milk lattes and light bites. After breakfast we decided to walk around and explore Midtown. We ended up coming across Publico, a beer pub, and stayed there for a couple hours! The atmosphere was full of energy and it was nice to sit and chat over a couple drinks and board games.

After Publico, we went home to relax and get cleaned up for dinner. On a whim we decided to try The Optimist, and we are so glad we did! This seafood joint was beyond delicious, and I 100% recommend getting a few appetizers to split at the table with a glass of wine. We got the octopus, shrimp, and ricotta toast. It’s on the pricier side, but definitely worth it. Everything was so fresh and the service was great. 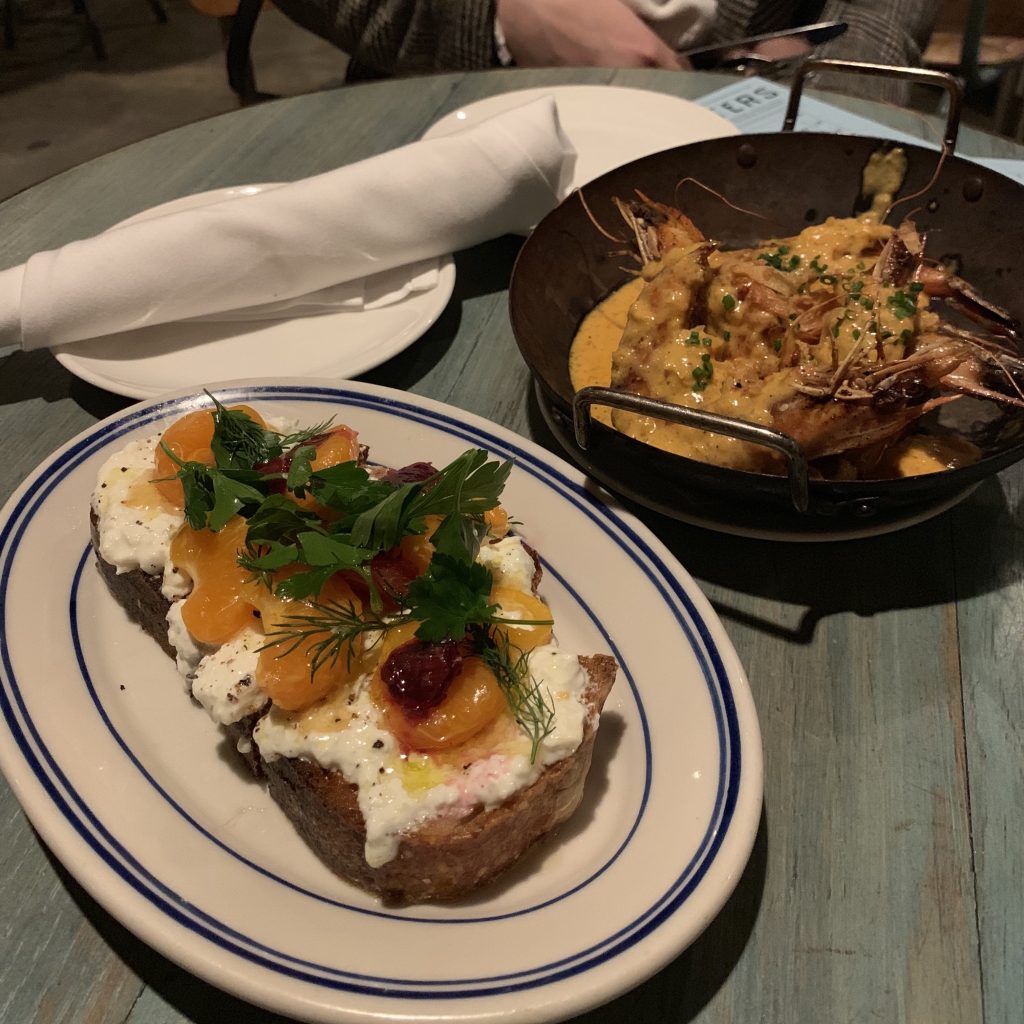 After The Optimist, we decided to check out the rooftop bar at The Moxy hotel. This spot would probably be WAY cooler during a warm, sunny day since it is by the pool. Since we visited later in the evening, they were getting ready to close, so we decided to head to Bartaco for some late night margs instead.

Day two was my favorite by far. I woke up early and went on a walk around Piedmont Park and soaked up every second I could in the beautiful city of Atlanta. After my solo exploration, Mack and I got ready and went out to Ladybird, which was recommended to us by one of the bartenders from the day before. 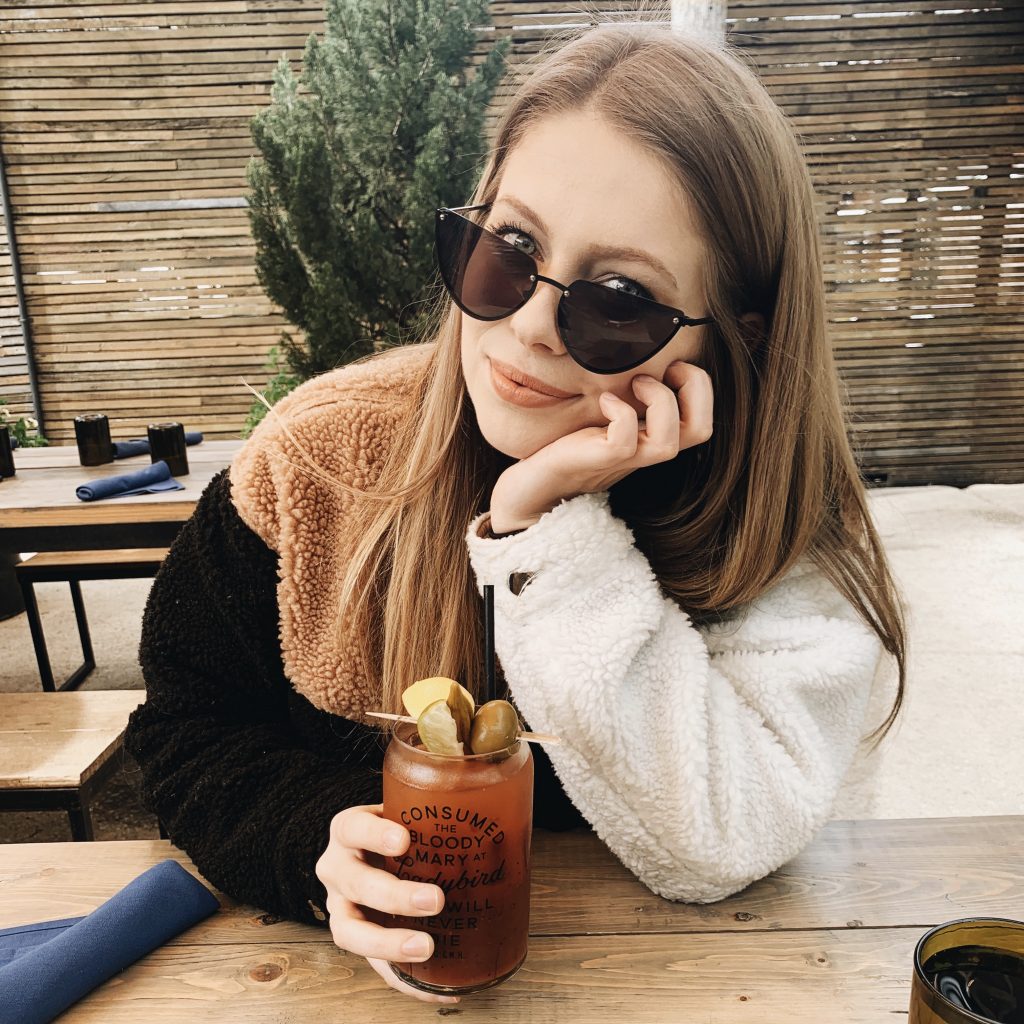 We are SO glad we chose this spot for brunch. The Bloody Mary was “possibly the best I have had” – Mack, and I had a beermosa, made with the one and only Miller High Life, champagne of beers. For food, I had the spicy chicken biscuit while Mack had the chef’s sandwich. We decided to split the arugula salad to add some greens to the meal. 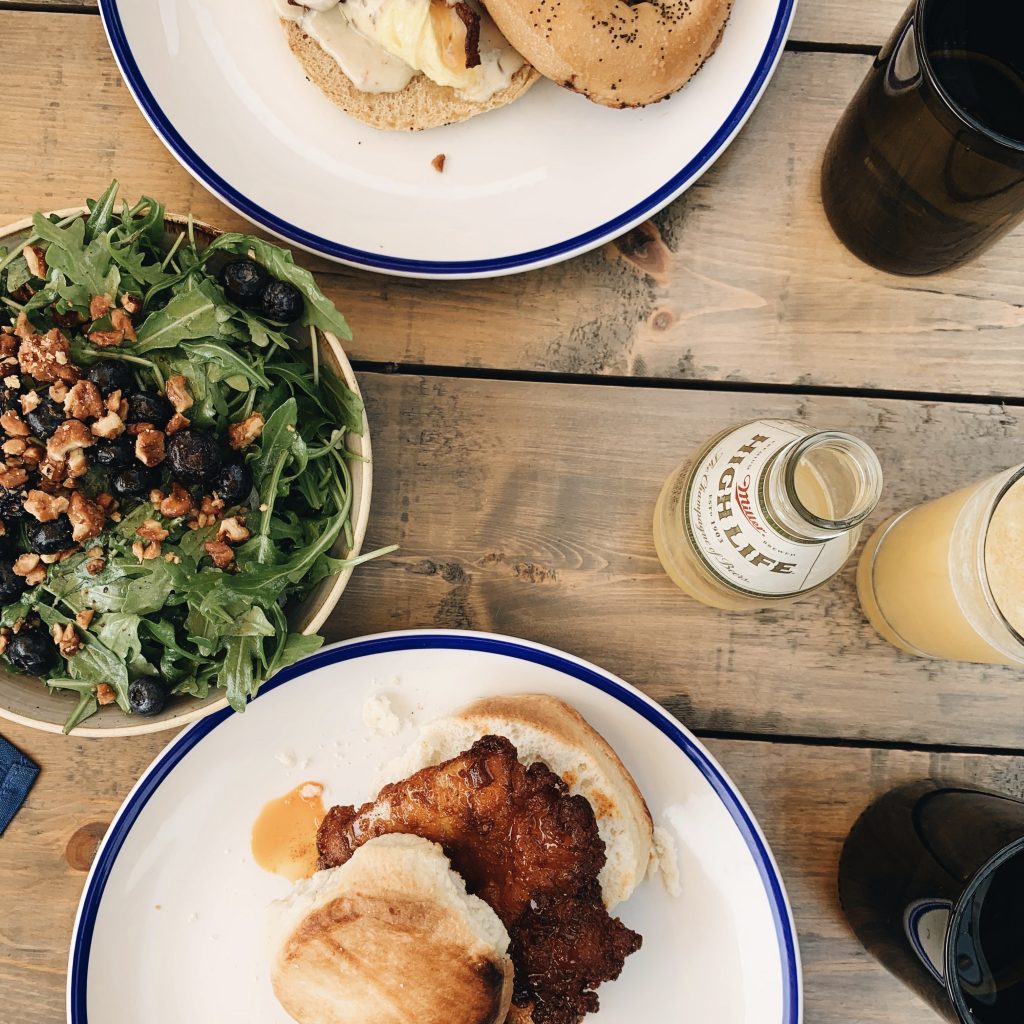 After brunch, when the sun was starting to peak out and warm up the day, we walked down the Belt-line, which is a paved pedestrian path that leads to some of the best spots (in my opinion) in the city.

We strolled down the Belt-line enjoying the beautiful weather and decided to stop in at New Realm Brewing Company because we heard good music playing from the rooftop patio. They have a ton of rotating beers on tap and are dog friendly, so we thought this was the best spot to hang out for a couple hours!

After New Realm, we walked down to the iconic Ponce City Market. This place is as cool as everyone says it is. There are a ton of unique shops alongside the larger brands you may recognize. There is also a few food trucks and other treats around the market. We decided to chill at City Winery for a while to recoup and find a place to try for dinner. We decided that we wanted to wait and have dinner a little later, so we took some Lime scooters back to New Realm and had a couple more beers and snacks. While waiting for our table, we met a group of people around our age who had 4 dogs with them, so naturally MacKenzie and I had to hang out with them. 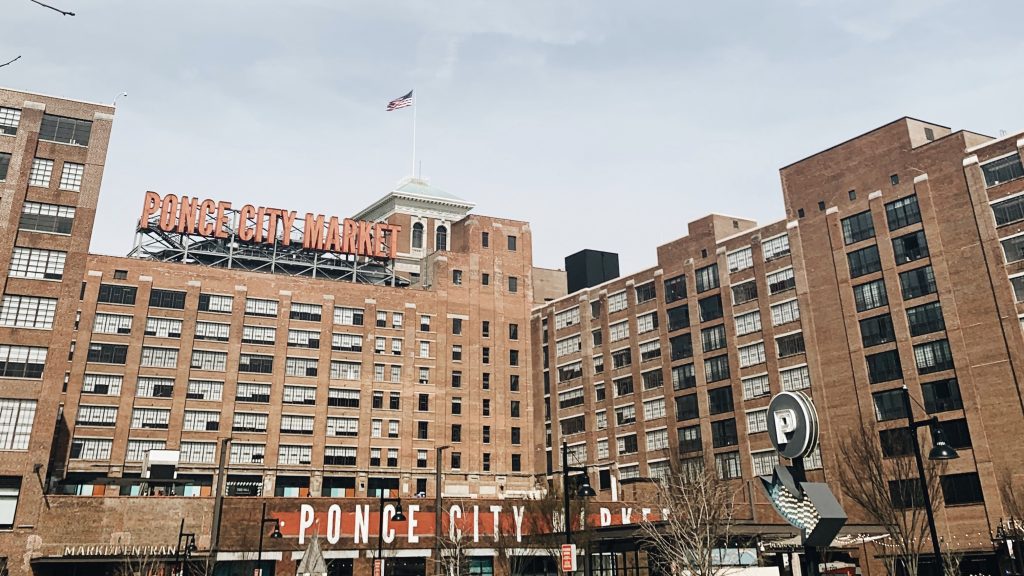 Once the sun was starting to set, we figured we should get home and rest before dinner. We took the Lime scooters back and stopped at the Jackson Street bridge to see the classic Atlanta skyline. Finally, we got our first (and only) picture of the weekend. This is pretty typical of us, since we get so consumed by the activities and conversation, we forget to take a picture together.

For dinner, we went to RA Sushi, which was close to our AirBnb in Midtown. It was light and fresh and filled the craving we both had for sushi. Since we had been out and about all day, we decided to stay in Saturday night. We cuddled up on the couch and watched a movie and got some rest since we both had to travel home the next morning.

Before heading home/to the airport, we had breakfast at Café Intermezzo. The food was absolutely delicious, and the café cubano was so authentic. I had the croissant with scrambled eggs and Mack got the egg white omelet. We split the brie + apple + honey crepes and I recommend you do the same! So. Freakin’. Good. 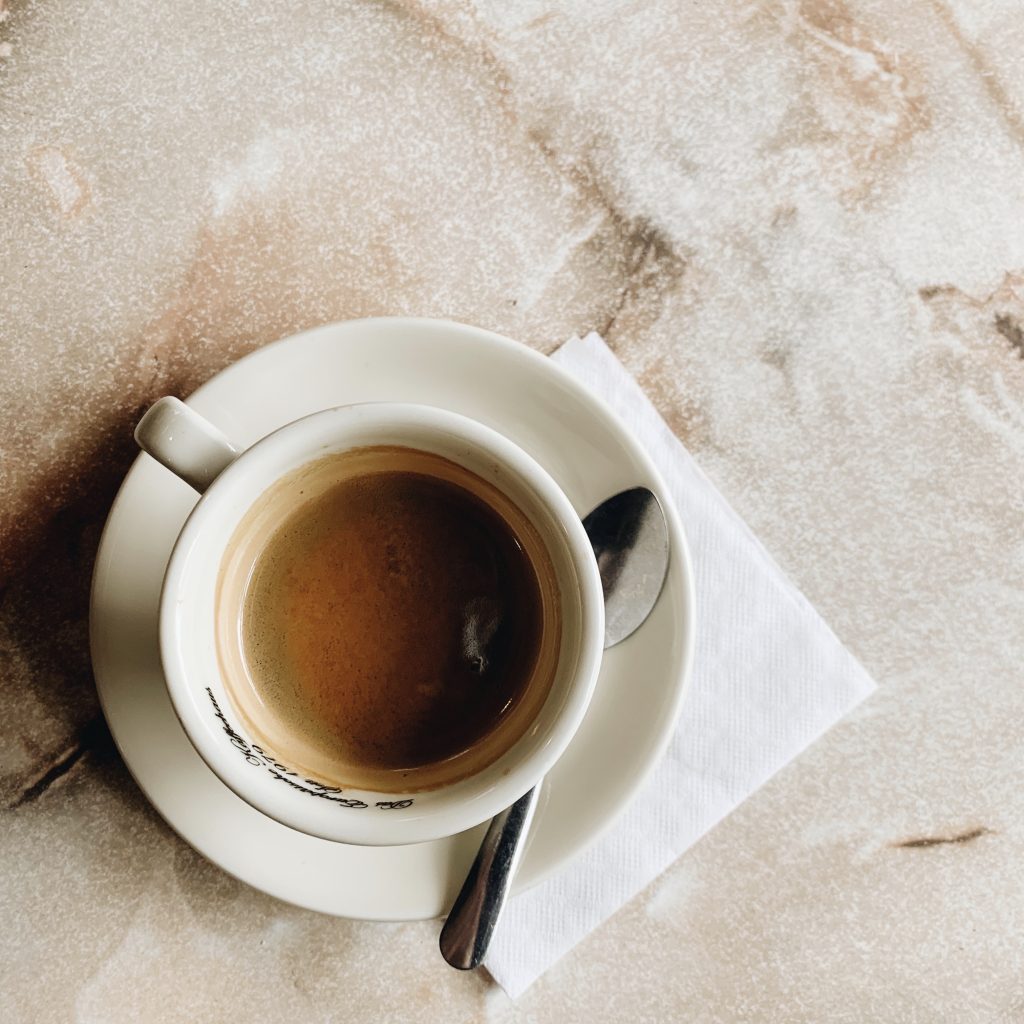 To wrap up the weekend, MacKenzie drove me to the airport and we hugged goodbye (for now). Hopefully post-grad life will make it possible for us to see each other more than 1-2x a year.

Unfortunately, we could not hit every spot that was recommended to us. So, if you’re ever in Atlanta, try out some of these spots and let me know your favorites!